Experience Clifton in our 7 room bed and breakfast

The Screen Door Inn is located on Avenue D, Clifton’s “Main Street”, directly across from the Chamber of Commerce and convenient to downtown dining, shopping and entertainment. Make your reservation online, by email, or phone today. Visit http://www.screendoorinn.com to find much more, but plan ahead to reserve as the location is extremely popular.

Our Innkeepers provide you with on site check-in and are on call throughout your stay for additional assistance.

A wholesome meal is provided for the complete Bed ‘n’ Breakfast experience.

The Screen Door Inn is located in downtown Clifton, Texas. Six of the seven guest rooms are on the second floor of the historic Brooks Block (or Brooks Building).

The building, purchased through two transactions by J.M. Brooks in 1895 and 1898 was completely destroyed in the fire of 1906 that leveled much of downtown Clifton. Immediately rebuilt after the fire, the second floor served multiple uses over the next five decades, including boarding house, hotel, apartments, doctor’s offices, beauty shop, radio service and more. Following complete renovation in 2011, the inn is the first business to occupy the upstairs floor in over 50 years. 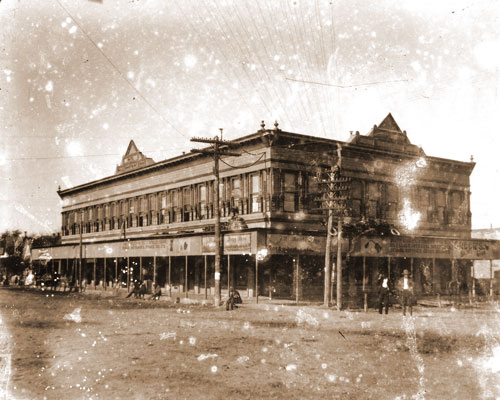 The corner room (now called “Bosque” room) was the office of dentist P.F. Gould both before and after the fire. The restored claw-foot tub in “Bosque” was found in the single bathroom once serving ten guest rooms. The wooden sign of Dr. O.M. Olson, who died in 1935, was found in the rafters during renovation. The Lobby and several guest rooms feature headboards, tables and benches crafted by local artisans from doors and wood salvaged during renovation.

Breakfast will be served downstairs at Corner Drug Café. This is the site of the old Corner Pharmacy, which served Clifton under many different names from the late 1800’s through the 1960’s. Many of its historic features have been retained including the soda fountain, Italian marble bar, bar stools and stained glass bar back.

The inn takes its name from the screen doors that once provided air circulation before the days of HVAC. The original screen doors have been restored and are hung on all room entry doors. On a cool day you may want to open a window and give it a try.

The hallway offers the best representation of a step back in time. The beaded ceiling, bead board walls, and pine floors are all original. The non-entry doors are restored originals, featuring original hardware. Pictures of historic Bosque County line the hallway to add to the feel of the early 1900’s.

Five of the upstairs rooms feature original wood floors. The red pine has been beautifully restored, but still shows many signs of years of wear.

The Lobby wall and Jennie’s Garden offer a partial look at the rock walls that survived the fire of 1906. While the original windows had to be replaced, their removal provided partial exposure of the brick walls in several rooms.

While the upstairs was virtually vacant when purchased, the only bathroom contained a claw-foot tub which has been restored and is now located in the Bosque room. A second restored tub was installed in the Heritage room.

The 9-foot mirror located on the Lobby wall once hung in the Corner Pharmacy. The origin is unknown, but is estimated to be about 100 years old.

Have a question? Want to suggest a news story or add an event to our calendar? Contact us today!